Adriana is also a native Spanish speaker from Colombia and has over two decades of teaching experience with young kids in South America and the United States.

​Adriana has extensive training and experience in Childhood Education. She got her Bachellor's in Pre-school Education from The Universidad Autonoma de Bucaramanga, Colombia. She's been an teacher for more than two decades both in North America and South America. For the last twenty years she has worked with Central Ohio preschoolers.

Adriana got a B.A in Childhood Education from the UNAB (Colombia). She is a native Spanish speaker and has over two decades of teaching experience with kids both in Colombia and Central Ohio. 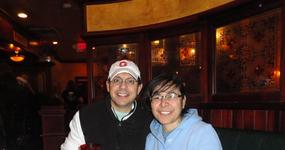 David received a B.A. in Modern Languages from the UIS (Colombia) where he studied Spanish (linguistics and literature), English and French. He also holds a Master's and PhD Studies in Latin American Literature.

Originally from Colombia. David received a B.A. in Modern Languages from the Universidad Industrial de Santander (Colombia) where he studied Spanish (linguistics and literature), English and French.

David is alumni from the Columbus International Program where he worked as a Spanish assistant teacher in Upper Arlington and Worthington High Schools.

David holds a Master's in Spanish (Latin American Literature and Culture) and studied his PhD in Spanish at OSU.

For more than two decades he taught Spanish to hundreds of students at different different schools in the Americas including The Ohio State University (USA), Universidad Industrial de Santander (Colombia), Alliance Colombo Francaise (Colombia). David has also been resident Director of the OSU Immersion Program in Cuernavaca, Mexico where he took American students to to study Spanish in Cemanahuac and helped them overcome the daily challenges of being immersed in a new culture and language

Besides teaching, David has also works as a Spanish/English interpreter in medical and legal settings, and provides translation, proof-reading and editorial support to medical publications.